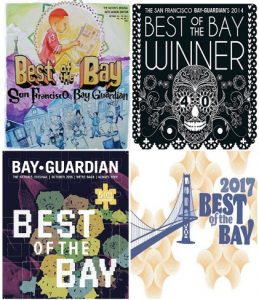 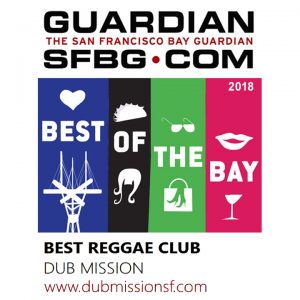 From the very beginning, Dub Mission was intent on giving classic and modern dub its due, making it a rare sort of reggae party. Luckily this period of time has also coincided with a great resurgence of interest in dub music through onstage performances and re-issues. We have devoted special nights to the music of various reggae greats including Bob Marley, Lee Perry, King Tubby, The Scientist and Prince Far I. Throughout we’ve also showcased classic roots, killer dancehall, and deep hybrid cuts.

See below for highlights of Dub Mission’s 20+-year history and links to photo and flyer albums.

Sep is the founder, promoter, and main resident at Dub Mission. For 22 years, Sep was also on Bay Area radio: first on the highly-influential college station, KUSF and later at Berkeley’s public radio station, KPFA. Sep is the co-compiler of Babylon Is Ours: The USA in Dub, a collection of all-exclusive American dub tracks (on Select Cuts) and co-producer (with Jason Short) of “Get Your Dub Wet” remixes (Daly City Records). Sep has won a Goldie Award (Bay Guardian) and been nominated for Best DJ (SF Weekly Music Awards). She has spun in London, Vancouver, Tijuana, New York, Washington DC, Miami, Portland, Seattle, and Los Angeles and has opened for the likes of Sly & Robbie, Lee “Scratch” Perry, Mad Professor, The Wailers, Culture, Big Youth, Les Nubians, Rachid Taha, Kinky, and many others.

Vinnie is a veteran of the San Francisco/Bay DJ scene and spins at various parties around the city. In 2000 Vinnie was voted “Best Local DJ” by the Bay Guardian’s “Best of the Bay.” The following year he won the City Search Editor’s Award for “Best Local DJ.” Vinnie was also nominated for “Best Local DJ” in the SF Weekly in both 2001 and 2003. He was the first DJ to play the Monterey Jazz Festival on its 50th Anniversary and was asked to return the following year. He was also the first-ever DJ booking for the Quebec City Jazz Festival. Vinnie has compiled the Loose & Juicy collection for Vanguard Records, Viva CuBop 2 for Ubiquity Records, and coordinated the reissue of Bobby Montez’s Jungle Fantastique for the same label. He spins a wide variety of music including roots reggae, jazz, hip hop, and soul to name only a few.

1996: Dub Mission makes its debut as a monthly party at Elbo Room. Within a few months, it becomes a weekly, starting its long-term Sunday night residency.

2001: DM celebrates its fifth anniversary with producer/ mixmaster Adrian Sherwood, whose On-U Sound System has been a great influence on Dub Mission.

2002: DM turns six with an unprecedented sound system show featuring The Scientist at the controls.

2004: DM celebrates its eighth anniversary with the return of Adrian Sherwood featuring Ghetto Priest on the mic. Dub Mission is also nominated for “Best Party” by the Club World Awards that year.

2005: DM hosts an international dub summit with rare West Coast performances by Yossi Fine of Israel’s Ex-Centric Sound System, and Cosmic Rocker and The Spy From Cairo of Organic Grooves, out of NYC.

2007: DM turns 11 with the debut of NYC’s Subatomic Sound System featuring Jahdan Blakkamoore and Treasure Don on the mic.

2011: DM celebrates 15 years with the return of Adrian Sherwood and Brother Culture, who perform together for the first time in the U.S. The show is also a chance to celebrate On-U Sound’s 30th Anniversary.

2013: DM celebrates #17 with a night featuring all the resident DJs and celebrating the release of the Biggering Riddim featuring DJ Sep with vocals by dr Israel and Mista Chatman.

September 2014: DM turns 18 with a night featuring all the resident DJs, plus Dubtronic Science performing live.

October 2014: DM competes in the first Red Bull Music Academy Culture Clash held in San Francisco, the only reggae crew to do so.

September 2015: DM turns 19 with headliner Addis Pablo (son of the legendary Augustus Pablo) and Jah Bami, plus all the residents.

December 2015: DM completes its last Sunday-night party and moves to second Fridays at Elbo Room in 2016.

September 2016: DM celebrates its 20th anniversary with a show featuring veteran mc Screechy Dan with Subatomic Sound System, plus all the residents.

September 2017: DM ends its residency at Elbo Room with its 21st anniversary, featuring special guests dr Israel, Will Magid, plus all the residents.

November 2018: DM presents its final show at Elbo Room SF before the club closes at the end of the year. Special guests include mc Chronic G, and Jef Stott on guitar, plus all the residents.